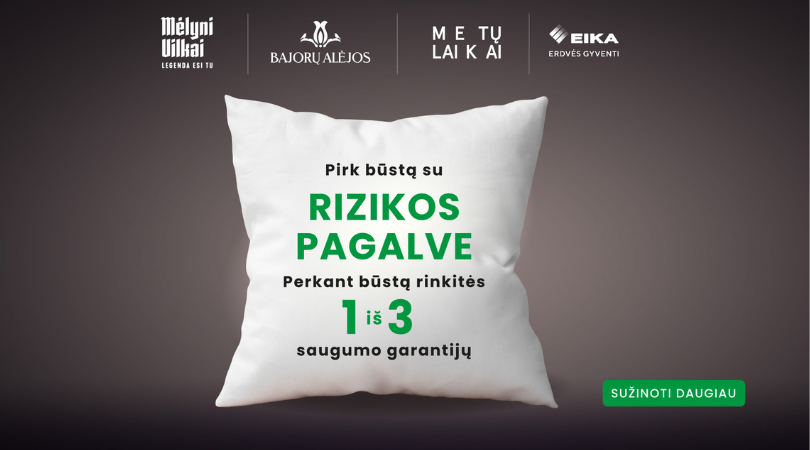 "Eika" this year rated by the two "Euromoney" awards

Successfully expanding it's leaders field in Lithuania – real estate development company Eika –  gained two awards by the prestigious financial magazine "Euromoney". The best Lithuanian real estate development company Eika were elected for the second year in a row. This year it has won and the best Lithuanian housing development company nomination too.
The fourth annual magazine "Euromoney" real estate review reflected the 54 countries in the world of real estate developers, advisors, financial institutions, investors and direct consumer feedback. Respondents were asked about the company, they believe, was the best, providing various real estate products and services to their markets. Respondents were asked to indicate the country of which they had the most knowledge. After this, they praised the company in the country is the best, as well, which is the second and third places in each category. In view of this, the company has been evaluated in four, three and two points. The study was carried out from 2008, 27 March to 25 April.
"Euromoney" Editor Clive Horwood submitting the awards, said: "In particular, a number of challenges in 2008, demanding financial environment," Euromoney "awards reflect the firm's ability to regenerate, to adapt quickly to market changes and the best use of organization – specific characteristics. "Euromoney" nominations evaluate the achievements in difficult market conditions – which is why these awards are so important."
Commenting on the international assessment of the company Eika Managing Director Robert Dargis said: "The appointments reflect the reality of our ongoing business strategy. Eika has long been on the market, and its name and the brand is well known. It is associated with years of experience, consistency and quality products. Even with the market downturn, the company continues to carry out the planned projects, but it is highly valued by our business partners and customers. "
Enterprise group EIKA consists of real estate development company "Eika", the construction company "Eikos statyba" (Eika construction) and engineering equipment plant "Inžinerinės idėjos" (Engineering Ideas). The Group circulation for 2007 was 207.4 million It employs 352 staff. Eika group companies work in various fields –  investment, real estate development and construction.
Eika is acquired fifteen years of experience in real estate development and implementation of many large commercial and residential projects, office buildings "Eikos Business Center I and II" (13,000 sq. m2 of space), low home village in Santariškės, Vilnius (1400 apartments) – "Vivulskio namai" (Vivulskis house) has been awarded as the best project in 2005-2006,  One of the major projects are currently being developed – Klaipeda, together with AB Achema expand investment project "Jūros vartai" (Sea Gate) (150,000 sq.m2), which provides for the AB Klaipedos ship repair the area into a commercial, leisure, entertainment and living space.
Nepraleiskite rinkos naujienų!